CORPORATE
Tenryu Canada, which was established in 1969 as the representative office of Tenryu Lumber Company Limited in Vancouver and then incorporated as Tenryu Canada Corporation in 1974, boasts a proud history of more than forty years in Canada. Its parent company, Tenryu Lumber Company Ltd, which was founded in 1907, has a history that goes back more than a century. The company was born out of the tree planting efforts of its founder, Meizen Kimpara, who had been labouring to promote flood control along the Tenryu River. Currently Tenryu Lumber Company Ltd continues to operate and manage its company-owned forests while contributing to the conservation of the local environment. As a building materials manufacturer, it produces high-quality flooring and wall materials for large facilities, schools, public institutions, as well as houses. Following in the footsteps of our parent company, Tenryu Canada Corporation plants, fosters, makes use of and protects our forests. While faithfully following the consistent policies laid out by Tenryu Lumber since its founding in 1907, Tenryu Canada offers quality wood products that meet the needs of our times.

Our Founder, Meizen Kimpara
It was Meizen Kimpara who laid the foundations of Tenryu Lumber Company, Ltd. Born in 1832, he played an active role in the development of modern Japan through his flood control efforts on the Tenryu River and his land reclamation and forestation projects in Hokkaido. Though Tenryu Lumber Co., Ltd. was formally founded in 1907, its roots can be traced back twenty six years earlier to 1881. At that time, Kimpara, who was working to develop industry in western Shizuoka, had an idea to establish a modern lumber business in the proximity of the Tenryu River utilizing steam power and machinery. In 1881, he founded Gappon Kogyo Co., the predecessor of Tenryu Lumber Co., Ltd, at Tenryu Nishigishi.

Company-owned Forests
When people visit our company-owned forests, they are struck by how well they are tended. Tenryu Lumber's Forestry Division is comprised of a team of extremely knowledgeable forest management professionals who are experts in every phase of the life cycles of the various trees in their care, beginning from seedling development, through planting, weeding, pruning, thinning, raising and final cutting. The trees in the company-owned forests are recyclable resources, and since the company's founding over a century ago, each tree is appropriately cared for each year in a planned manner, from seedling through to maturity,

Tenryu Canada Corporation
Tenryu Canada Corporation is located at the north foot of Granville Street in a building directly facing the Port of Vancouver in Vancouver, British Columbia, Canada. With a cargo handling volume of 79,400,000 tons per year, it is the largest port in Canada, and the largest on the west coast of America. In terms of container cargo handling volume, it is the largest in Canada and is fifth in North America. Therefore, shipping and forwarding is handled very smoothly.
PEFC
PEFC (Programme for the Endorsement of Forest Certification)
PEFC (Programme for the Endorsement of Forest Certification) is a certification that is awarded to a forest site that is being properly managed in these three ways: environmentally, socially and economically, and which ensures that the site is being protected both now, and in generations to come. In other words, that the forest site is certified to be “sustainable". Tenryu Canada Corporation acquired PEFC certification (COC) in 2011, and ships eco-friendly products to its customers. 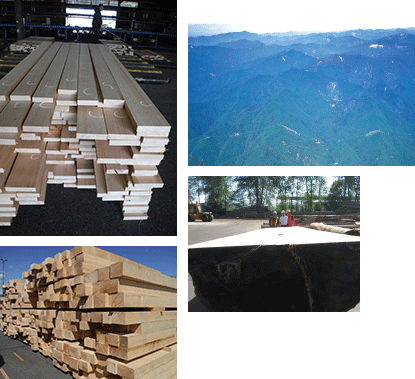 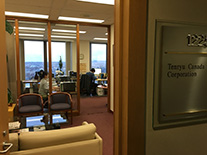 Corporate Name:
Tenryu Canada Corporation
Head Office:
1225-200 Granville Street, Vancouver, British Columbia, V6C 154, Canada
Established:
June 1974
Tenryu Canada Corporation purchases its lumber and logs directly from various large and small forest companies in British Columbia, Canada. British Columbia is one of the world's richest regions in terms of natural resources, and in order to properly manage and conserve these resources British Columbia has some of the most rigorous environmental and forestry conservation provisions in place anywhere in the world. Tenryu Canada Corporation ships high-quality British Columbia lumber to customers all over the world from Vancouver, North America's west coast's largest international trading port. In addition, we also provide lumber that is custom cut to our client's requirements.
Thanks to our convenient location on the west coast of Canada and our port's reliable transportation system, Tenryu Canada Corporation can ship efficiently and with great cost-effectiveness to major markets all over the world.
This integrated transport system helps to reduce the costs of not only natural resource development but also shipping costs to other points in North America and all over the world.
The Port of Vancouver has four container terminals. In addition to on-dock rail service that can deliver goods directly to each terminal, it is the only port in both Americas equipped with a quad lift crane. This crane system is capable of lifting four 20-foot containers or two 40-foot containers at the same time. This system, therefore, can increase container-handling capacity by up to 40%.